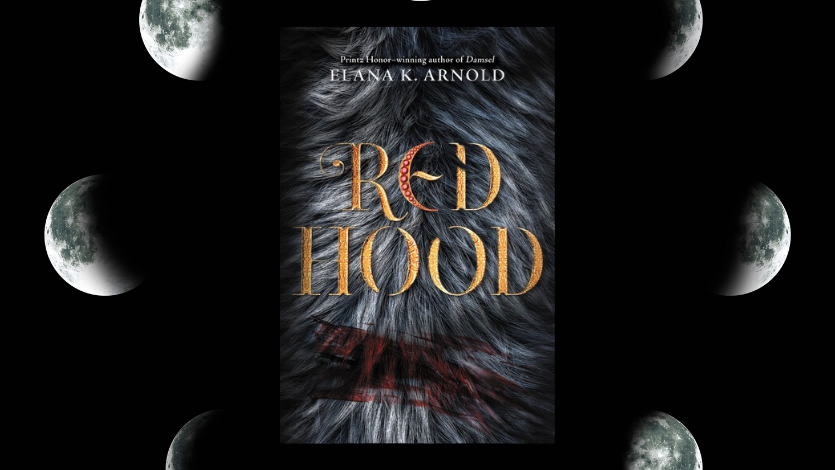 Elana K. Arnold reimagines the story of “Little Red Riding Hood” in her latest young adult novel, Red Hood. The book follows Bisou Martel, who uses her newfound ability to fight werewolves who are preying on the girls in her community. It’s a story about injustice and rage, but also community and the strength that comes from the support of others. To celebrate the book’s release, Arnold talked to me about the inspiration behind the story and which fairytale trope she wishes would disappear. 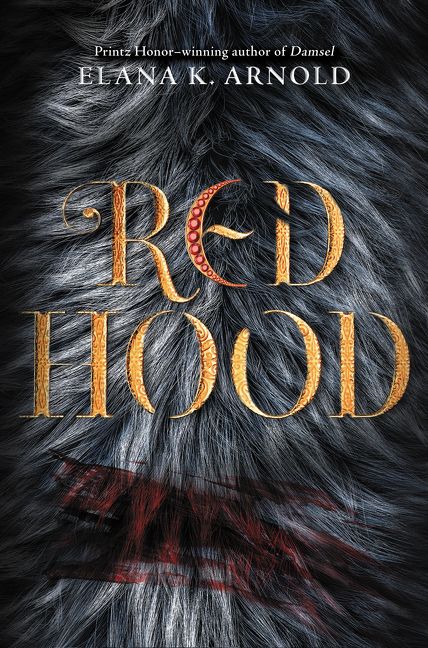 What was the original inspiration behind Red Hood?

Honestly, it was my own menstrual cycle.

It was three and a half years ago, and I was ice skating in an outdoor rink up near Yosemite. The rink was ringed with trees, and the ice glowed milky white in the light of the full moon. And I’d just begun my period.

Sometimes, right before I have a really good idea, the back of my brain begins to tingle. I know this sensation is telling me to wait, and listen, so I did. It occurred to me to wonder: If werewolves cycle with the moon… and menstruators cycle with the moon… then what if there were a girl who, when she begins her period for the first time in sync with the full moon, finds that with her blood comes this power to hunt werewolves?

Your last novel, Damsel, is also inspired by classic fairytales and taps into the same rage over how women are treated and viewed in our patriarchal society. Do you see these two works as being in conversation with each other?

Oh, definitely. Much in the same way as I see my previous set of novels, Infandous and What Girls Are Made Of, as thematic sisters exploring embodied female shame, Damsel and Red Hood feel connected, too, though the DNA they share is anger and claiming of power, rather than shame.

Why did you decide to set this novel in our world as opposed to a fantasy world, like in Damsel?

As soon as I had the idea for this book, the opening scenes were clear to me—they involved an embarrassing sexual moment in the back of a car after a high school dance, followed by the main character running, barefoot and underdressed, through the woods, where she would meet a wolf. Those images dictated to me that Red Hood would be set in the here and now, much as my early vision of a dragon in a castle when I was imagining Damsel necessitated that book being set in a fairytale world.

You’ve talked about your recent books being uncomfortable to both write and read because of the topics they tackle. How has this impacted your writing process?

I see my work as telling the best story I can, the truest way I can. Sometimes, this does mean that I work in uncomfortable territory. But not all of my stories are set in these brambles; I also write gentle, loving, kind scenes and stories, and these nourish me. We all contain multitudes, and—especially for those of us who work in emotionally shadowy territories—it’s important to turn our faces to the sun, in equal measure.

The heroine of Red Hood is called Bisou, which means kiss in French and felt very intentional in a book about assault. What inspired you to use that name?

Some elements of a book are deliberate; others are gifts from the back of the brain. “Bisou” just came to me, but her last name—Martel—I thought about for a long time. It means “small hammer” or “warrior,” and it has implications of strong family and community ties. Together, “Bisou Martel” felt just right.

Three women get to tell their story here: Bisou, her mother, and her grandmother. Each character is even given a unique point of view (second-person, poetry, and first-person). Why did you choose to structure the book this way, and how did you decide which character would pair with which point of view?

Red Hood required many rounds of revision, and the characters revealed themselves to me in their own time. The decision to tell Bisou’s story in the second person came from my desire for the reader to inhabit her body—to feel what it feels like to menstruate, but also to feel what it feels like to be physically strong. I am not a physically strong person, I’ve never been able to do a pullup; but in some ways, this book operates as a rape-revenge fantasy, and I wanted the reader to experience the rush of adrenaline that can come with a physical confrontation and a victory. The second person was the perfect choice for that.

Bisou’s grandmother Sybil seemed the most straightforward to me in her motivations and desires, so first-person narrative fit for her.

Bisou’s mother (Sybil’s daughter) was the most difficult to pin down. She is elusive—both to Bisou and her grandmother. I finally decided that she would speak to us through poems that she has left behind. My first emotion after making this decision was triumph—I’d figured it out!—but triumph was replaced almost immediately by fear. Oh, no, I thought. Now I need to write poetry. I’m not a poet, but I did my best, and, luckily, my sister Mischa Kuczynski is a poet, and she helped me clear away the weeds from the poems I’d written, turning them into something more beautiful than I could have ever made on my own.

There’s a moment in the book where Bisou says that she’s tired. It’s clear that rage can be fuel and channeled into actions, but it can also be exhausting. Can you talk about striking that balance when writing?

None of us gets to choose how the world fills us up, but each of us gets to decide what we do with the experiences that shape our young years. For me, writing books like Damsel and Red Hood is a way for me to transform feelings like shame and rage into art. Writing these stories can be exhausting, but in a different way than keeping these feelings inside is exhausting—it’s more of a cleansing exhaustion, a feeling of having run as well and as hard as I could. An emptiness, rather than a churning over-fullness.

I find that when I am working on particularly emotionally charged books, I feel drawn to sit near either fire or water (depending on the season) and to nourish myself well. I take long walks. I dredge up memories and feelings and talk about them with a friend. I search for the right way to shape these experiences and emotions into my work.

Your recent work subverts fairytale tropes. If you could rid the world of one of those tropes, what would it be and why?

I think the kissing awake of the maiden bothers me the most—Sleeping Beauty in her castle, Snow White in her glass coffin. This idea of the corpse-like maiden, frozen in time and beauty, whose agency is restored by the prince who serves as the ultimate Male Gaze, bringing her to life with his desire for her, really says a lot about how we can see young women as static, as a prize to be won rather than as a person with agency and desires.

Classic fairytales often have a moral they’re attempting to impart on the reader. When it comes to Red Hood, what message do you hope to leave readers with?

My job is to tell the best story I can, in the clearest way I can. I try very hard not to think about messages or morals as I’m writing; in fact, I try not to think about the reader at all, as I work through early incarnations of the manuscript. As I revise, I begin to ask myself: What belief do I have about what it means to be human that I am sharing in this book? Ruminating on that question helps me find the thematic threads that I work to pull to the story’s surface. A belief that I have about what it means to be human, not a message to impart or a moral to teach, is what guides my revision process. With Red Hood, I was dismayed to realize that one of my beliefs is that sometimes, violence is called for.

This makes me deeply uncomfortable; as a person who has spent her life trying to avoid conflict, making excuses for the bad behavior of others, and taking responsibility for violence enacted on my body. The thought that part of me believes that violence can be necessary and even good in some extreme situations goes against my lived experience of avoidance, deflection, excuse-making, and tolerance of others’ bad actions and violence.

But then I remember the girl I was, and I find myself wishing I could call back to her. I wish I could help her turn her splayed hands to fists.

Red Hood does posit that there is a time and a place for violence. But it also posits that the time and place is in self-defense or in the immediate defense of others—not in retribution, not in revenge. The book also says (another of my beliefs) that we are stronger in a community than alone, and that physical strength is not our only defense against those who seek to harm us.

If you are looking for a lyrical, beautiful voice, pick up the work of Liara Tamani. Her first novel, Calling My Name, is incredible in its stillness and its ability to shift the ground beneath its reader, and I’m really looking forward to reading her second novel, All The Things We Never Knew, out June 9, 2020.

If you want to read an epic, devastating, wide-ranging story across generations, Anna-Marie McLemore’s Dark and Deepest Red is the book for you.

If you want another badass girl in the forest, Mindy McGinnis’ Be Not Far From Me is your book. It’s like if Hatchet starred an angry, menstruating teenage girl, and it’s visceral and immediate. 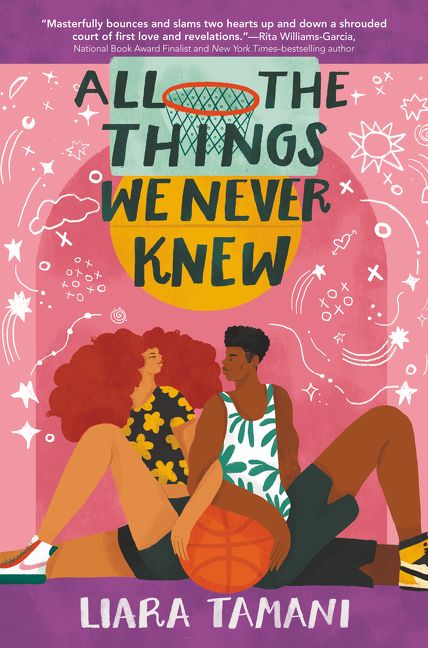 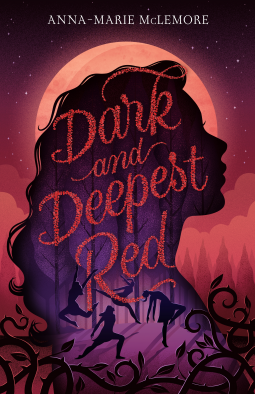 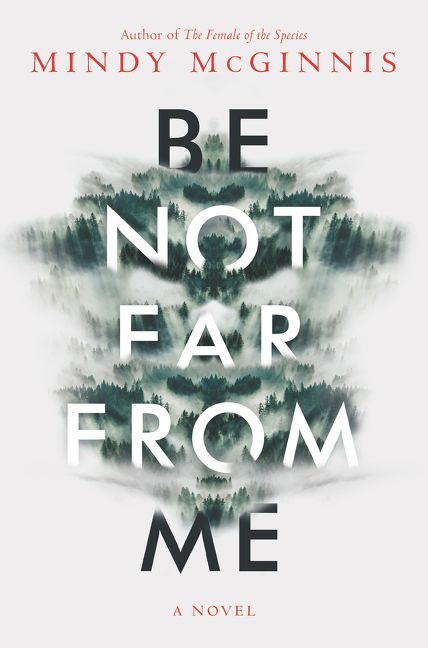 Elana K. Arnold is the author of critically acclaimed and award-winning young adult novels and children’s books, including the Printz Honor winner Damsel and the National Book Award finalist What Girls Are Made Of. Several of her books are Junior Library Guild selections and have appeared on many best book lists, including the Amelia Bloomer Project, a catalog of feminist titles for young readers. Elana teaches in Hamline University’s MFA in Writing for Children and Young Adults program and lives in Southern California with her family and menagerie of pets.