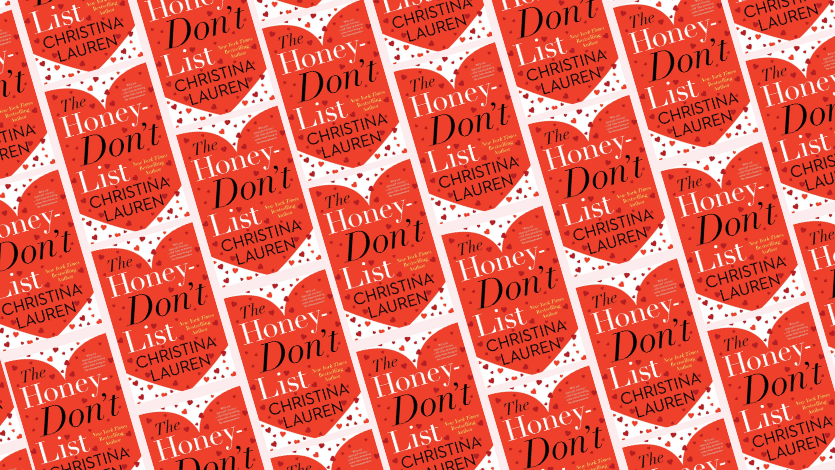 Writing duo Christina Lauren is back with The Honey-Don’t List, a new romance novel that follows two assistants working for a celebrity couple whose marriage is falling apart. Remodeling and design duo Melissa and Rusty Tripp are beloved by fans, but tensions begin to rise on a tour for their upcoming Netflix show. Assistants Carey and James are tasked with keeping the two focused—easier said that done when crammed together in a tour bus. To celebrate the book’s release, Lauren talked to me about the book’s unique structure, road trip snacks, and celebrating the 25th book they’ve written together. 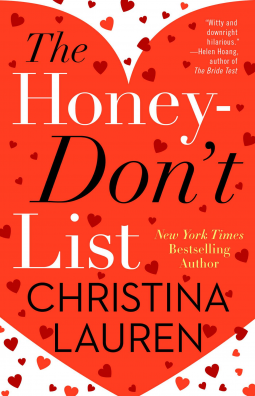 The first draft of this had a lot more of Melly and Rusty’s marriage in it—their history, bickering, drama. But we found that their strife had nearly as much page time as Carey and James’ love story. We probably had to do that first so that we really understood what Melly and Rusty were grappling with and could write it authentically. Once we pared down their marriage problems and really focused in on James and Carey, it became such a sweet love story, and more of a book that we, as romance readers ourselves, would want to pick up.

The book begins with a police transcript and later includes threads from Twitter and excerpts from Melissa and Rusty’s fictional book on marriage. Did you know from the beginning you wanted this book to have a unique storytelling structure, and how did that impact your writing process?

Yes! That was always the plan. We knew that we wanted Melly and Rusty to be big home remodel gurus, and for the romance to be between their assistants (sorry, James), but we wanted the book to feel dynamic and set in ‘the real world’—if that makes sense. Since we’d both adored the way Big Little Lies opened with the interviews, we thought, why not play around with that in a romance? The way everyone views a crisis through their own lens is so fun to manipulate. Honestly, writing the interviews, the newspaper and magazine articles, and the excerpts really helped us keep the writing fun and engaging. It helped break up the process a little. We aren’t sure if it’s something we’ll do a lot, but it was nice to try something different.

Rusty struggles with the transition from small-town shop owner to Netflix star. There’s a sense of being pressured to commodify what you love and then protecting that brand at the expense of real human lives. What inspired you to write about this topic?

As is frequently the case, Rusty was a character who evolved as we wrote him. Initially he was just fun-loving, along-for-the-ride guy, sort of devoid of any agenda (making him a really perfect partner for the ambitious and controlling Melly). But as we wrote him, he became much more of what you’re saying: He realized too late that he liked things better the way they used to be. The Tripps’ career moved like a rocket, and they had to say “yes” to things before they even realized how it would impact them. We think that conflict is fascinating, and the truth is that it was perfect for Melly’s needs, but not Rusty’s. It’s easy to imagine that it would be hard to navigate a marriage in those circumstances.

Can you tell us more about what drew you to writing a character with dystonia, a movement disorder that affects Carey’s hands?

Dystonia is a neuromuscular disease that causes excessive and involuntary muscle contraction. It can be painful, and can cause contortion of body parts, often around joints. Both my (Lauren’s) father and my sister have been affected by this disease; my father had generalized dystonia which means his disease affected multiple muscle groups throughout the body. My sister has a focal dystonia (oromandibular), affecting only her jaw muscles. My sister’s dystonia is entirely controlled with Botox injection—she gets anywhere from 8-16 injections in her jaw muscles every few months. Incidentally, most people don’t realize that about 60% of Botox use is clinical; only about 40% is cosmetic use!

It was really important to us to someday include a character with dystonia, primarily because, just as it is only one aspect of Carey’s life, it is only one aspect of my sister’s life. There have been times when it’s been incredibly hard on her, but most of the time she is like any other person living with a medically-controlled movement disorder, going about her life, adoring her family, and enjoying her very happy marriage. Cool fact: My sister married one of my best friends from college; their love story is probably my favorite love story of all time (other than my own) and there are few things more romantic to me than the way my brother-in-law has supported, protected, and adored my sister through all of her battles and victories with dystonia.

Ultimately The Honey-Don’t List isn’t a story about Carey’s movement disorder; it’s a love story between two people who meet and fall in love under simultaneously hilarious and stressful circumstances. But the way that James reacts to Carey’s dystonia and supports her without question is a big part of why he is the perfect hero for her.

Carey and James work for Melissa and Rusty Tripp, a celebrity couple known for their remodeling and design chops. If you could have one designer (real or fictional) create your dream writing studio, who would it be and why?

We’re both very different people with wildly different tastes, so we’d need someone who listens and can tailor a look to each of us. Lo likes a more mid-century modern feel, where Christina’s dream office would lean on the traditional side. Carey would probably be ideal for us because she specializes in smart ways to utilize space—essential for a home office—and since she spent years working with Melissa Tripp she’s used to difficult people. I KID I KID.

Carey’s road trip snack of choice is a bag of Funyuns. What are your road trip essentials?

(Editor’s Note: Christina Lauren’s views do not represent We Are Bookish. Twizzlers rule.)

Patti Murin (who played Anna in Frozen on Broadway) tweeted about loving your books last summer, and now she’s narrating the audiobook for The Honey-Don’t List! How did this magical collaboration come to be?

Isn’t it insane? We are so excited; she’s perfect for the role. Essentially it all started when she tweeted us about The Unhoneymooners. We DM’d her and offered to send her a CLo book care package. We did, and she read them and we chatted a lot about Josh and Hazel, because Patti really is Hazel. She then offered to have us be her guest at a performance of Frozen. We went backstage and hung out with her after the show (it was amazing), and it’s just been a lovely connection. When we talked about who we wanted as a narrator, we knew that Patti was finishing her Broadway run soon and figured she might have time to do some voice work. We asked Simon Audio to look into it, and it worked out. We are DELIGHTED.

This is your 25th book! Let’s celebrate by making a quick Honey-Do list and a Honey-Don’t list. What are three Dos and three Don’ts for aspiring or new writers to keep in mind about career longevity?

Twenty-five books is a huge accomplishment. What’s surprised you the most on your journey from writing fanfiction together to becoming bestselling authors? Are there any topics or tropes you haven’t explored in previous books that you’re hoping to tackle in the future?

The funniest thing is that we finished The Honey-Don’t List mid-2019. We’re already writing number 27 (#romancepublishing)! But whenever someone says, “Wow, twenty-five!” it does make us stop and think. That’s a lot of books in seven years. That’s a good reminder to us—and a good bit of advice for everyone—to slow down. Celebrate the accomplishments. Honestly, it’s really cool, isn’t it? Twenty-five books with your best friend? We love writing together as much as we love anything in this life. The most surprising thing has been how easily this partnership has endured. It’s made us better people. We haven’t just created books, we’ve created a really spectacular partnership and friendship, and that’s the coolest bit.

Christina Lauren is the combined pen name of longtime writing partners and best friends Christina Hobbs and Lauren Billings, the New York Times, USA TODAY, and #1 internationally bestselling authors of the Beautiful and Wild Seasons series, Dating You / Hating You, Autoboyography, Love and Other Words, Roomies, Josh and Hazel’s Guide to Not Dating, My Favorite Half-Night Stand, and The Unhoneymooners.